I never thought I would find myself in Ethiopia. But then again I never imagined I would be a senator. So, here I am a senator representing the Philippines and presiding over the meetings of women parliamentarians of the Inter-Parliamentary Union (IPU). I was elected President last year in South Africa and as such, travel quite a bit ensuring that there is a gender perspective in the discussion of all issues, whether it be climate change or the global financial crisis.

The IPU’s philosophy is that true democracy can only be achieved when men and women work as partners in the governance of their countries. Thus, the IPU provides a fora for the discussion and exchange of ideas on a wide range of topics among women parliamentarians. It also initiates meetings and discussion panels that promote the participation of women in the political process.

The Meeting of Women Parliamentarians took place on Sunday, April 5, 2009, the highlights of which were:

The financial crisis and its effect on women:

What was noteworthy was the consensus that women and children are the ones primarily hit by the financial crisis. Food supply is affected, budgets for and access to health care and social services are at risk. Women, being the homemakers are the first to feel and suffer these effects. The women parliamentarians voiced their concern that any discussion and eventual solution to this crisis should include a gender perspective.

The women broke up into two groups to debate this topic from a gender perspective. The first group focused on climate change and the second group on renewable energies. This was a very interesting topic and I found myself rushing from one conference room to another to participate and get as much from both discussions as I could. I will blog about this separately.

Debate on Women in politics. This session began with a report tracking the number of women in parliaments around the world and highlighting progress and setbacks. The floor was then opened for interventions. I shared my ideas on the progress and setbacks in the Philippines which I believe is similar in many countries.

Other topics of interest were:

One of our panel discussions was on the Countdown 2015. This is a program involving UNICEF, WHO and various partners that monitors the progress of different countries in achieving the millennium development goals. Like the Philippines, Ethiopia is on target to meet goal no. 4 which is the reduction of the child mortality rate. Both the Philippines and Ethiopia are not on target for goal no. 5, which is maternal mortality rate. I have been working on this in the senate and will report on this again soon.

After this session, I joined some of the parliamentarians in visiting a health center as part of the immersion program of the World Health Organization.

Adolescent Girls: The girls left behind?

The panelist presented the sad reality that adolescent girls are vulnerable to gender-based discrimination and gender inequalities. They are exposed to violence in the very places where they are suppose to be protected their homes, communities and schools. They are also at risk to HIV/Aids and other sexually transmitted diseases. Adolescent girls, as first time mothers also are high risks for maternal mortality. I participated in this discussion and brought up the plight of our adolescent girls who are victims of abuse in their own homes, particularly where the mothers are away at work or OFWs.

Meeting with representatives of the US Congress:

I had the pleasure of meeting representatives of the US Congress. Believe it or not, the US has not been a member of the IPU for about a decade. My task was to present to them the work of the women parliamentarians at the IPU. One of the US representatives Nancy Wilson talked about the welfare code she drafted when she was a Senator under Bill Clinton’s administration. She will be sending me more information on this.

The Ethiopians take pride in being one of the cradles of human life. Thus, their theme: Ethiopia: Where it all began. I made sure that I visited their national museum, which turned out to be the only downtime activity I had. The exhibit of fossils found in excavation sites in Ethiopia and the explanations were very interesting.

The full report of my work in the IPU will be on my official website soon. 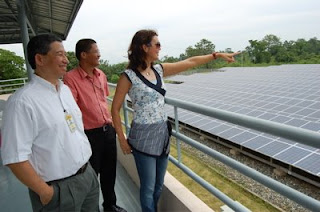 During my trip to Cagayan de Oro a few months ago, I visited the CEPALCO Solar Power Plant, the largest solar power plant in Southeast Asia. It currently serves 900 households in the area. I was surprised how simple it all seemed. As you can see in the pictures, it is simply a large number of solar panels laid out on 2 hectares of land. The sunlight that hits the solar panels are immediately converted into AC voltage and then transmitted to the power grid for distribution.

The Renewable Energy Bill is one of the priority measures in Congress. I am one of the authors and as such, I have been studying different kinds of renewable energy.
Solar power, like other renewable energy is great because it is environmentally friendly. The problem is the high cost involved. Because of this, solar power is either subsidized or users have to pay a premium. Many are of the view that it is well worth the price, given the savings in environmental and health costs associated with the use of fossil fuel. 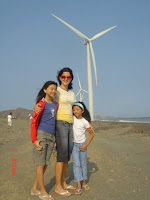 At the end of the day, energy planning is all about maximizing our indigenous sources of energy such as natural gas and oil fields in Palawan (so we reduce our dependence on imported fuel), geothermal energy which is abundant in the Philippines and investing in infrastructure and tapping new technology to developing renewable energy coming from wind, solar, ocean/waves and hydro ( I visited the site of Bangui Windmills last year during a trip to Ilocos Norte. More on this another blog) 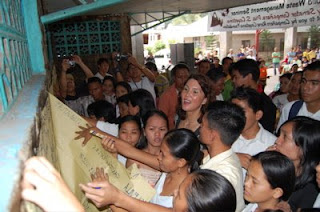 My staff along with Mother Earth Foundation held a solid waste management in Barangay Carmen. Participants came from different sectors ”barangay officials, students, business establishments etc. I arrived in time to give a pep talk, answer a few questions and witness the action plan signing wherein each group/sector commited to carry thru the action plan they had written out. Their enthusiasm was contagious. I told them I hoped to see their plans materialize the next time I visit CDO. 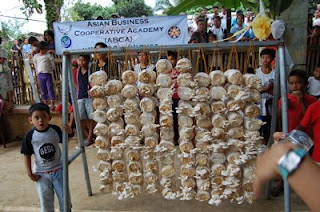 The surprise of this working visit was a stop at the Asian Business Cooperative Academy where I learned about one of the livelihood projects of the students “ the flurutus mushroom which are grown in cylindrical shaped containers filled with sawdust. All one has to do is sprinkle them with water a couple of times a day, wait for them to grow and harvest them. The next batch automatically grows back. I took home some and am hoping they we can harvest our mushrooms soon! 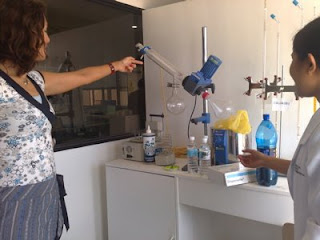 Clean water is a big problem in our country. Based on a survey of NSO, only about 80% of Filipino households have access to clean water. This means, 17 million Filipinos use and drink water that could make them sick.

Thus,it was with great excitement that I visited the Rio Verde Water facility. Amazing to see how dirty river water that 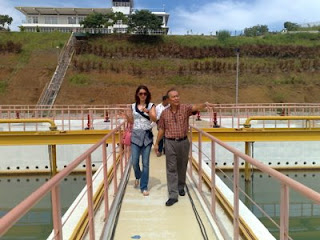 flows
from Mt. Kanlaon is purified through a few touches of the computer. They walked me thru the whole process of receiving the water, flocculation, sedimentation, filtration and finally — clear water ready for distribution. I am told that this meets the WHO standards for drinking water. We hope to see more programs like this.